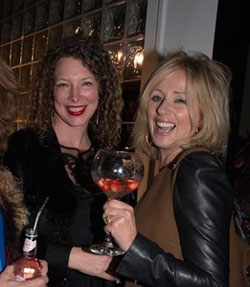 How long have you lived in the area? Seven years. Askew Road is my hub now. I do all my shopping at The Co-op, Ginger Pig, and the Asian shop opposite because they do fabulous fresh herbs in big bunches. And I go to Laveli, however you pronounce it. I use them as a deli. And Askewine. We get our cheese from Askewine.

Are you a Londoner?

Your LinkedIn entry states that you were expelled from Harrogate Ladies’ College for showing off. What were you showing?

I went on stage every break and sang Hey, Big Spender. People from all over the school came to watch me. Instead of working, I used to write salacious stories and everyone would listen. I was a one-woman drama department, definitely attention-seeking. I come from a family of four girls. We were all attention-seekers but I was the worst. In a large crowd, you have to scream louder. I was a middle one. Can’t you tell? Ever since I was little I was smitten by the world of entertainment. My first memory was my mother doing the twist. She was rather racy. I remember her wearing a miniskirt. She had a beehive and loved musicals. I went to see The Sound of Music four and a half times, the half because she had to rush out to the hairdressers.

You’ve said that you wanted to be the naughtiest girl in school. Why?

Fun. And I have no truck with authority. I had a gang at school, The Roving Spinsters.

You were a cabaret artiste in the dance troupe Pussies Galore. How naughty were they?

We didn’t strip, but everyone thought we were strippers. We performed as James Bond girls. We were pro-glamour. Everyone else was grunge at the time. Once we did a gig in Reading and all these Hell’s Angels’ gangs turned up. The police tried to arrest us. We did it for 3 years and they were the best 3 years of my life to be honest. I was on the front cover of The Face. We were in all the papers. We were famous for at least one summer.

What did your mother think of Pussies Galore?

I’m not sure. She’s never said. And I’d never ask. But she still expects the unexpected from me now.

You’re the founder of Radio Gorgeous. For those yet to tune it, what’s gorgeous about it? (Co-host Donna Freed joins in)

Donna: What’s gorgeous about it is we’re joyfully celebrating women’s voices. It has nothing to do with being against men. But there’s a void and we wanted to hear women’s voices. There are so many women out there doing all kinds of things and when they speak about it, all their passion and energy enthuses everyone else. We want to unleash that enthusiasm. Hearing these women makes what they do seem so much more possible. If you’re a late bloomer like me, it just clears the air.

Josephine: We make 3 or 4 podcasts a week, 15-30 minutes long. You can listen to them on your mobile, or tablet, or on your computer. You can download them on iTunes and take it anywhere: on the tube, on the bus. The other day, I put it on my phone and listened as I tidied up the house. You can run with Radio Gorgeous, but I suggest lying down.

Do you ever feature men?

Josephine: Once a year.

Donna: On Sadie Hawkins Day (November 13th). That’s an American thing, where I’m from. Sadie Hawkins was a cartoon character. She was the ugliest girl in town and her father wanted her married so he arranged a race and all the young men ran. Whoever Sadie caught, Sadie could have. On Sadie Hawkins Day last year, we invited three lovely, lovely men. Josephine: Actually, one refused to come on, Charles, Earl Spencer, Diana’s brother. I invited him because I sat next to him at a lunch and he said, I’m too scared to come on Radio Gorgeous.

Donna: Which is a probably a triumph.

Josephine, you said on one of your podcasts with Donna that you set up Radio Gorgeous because of ageism? What did you mean?

Josephine: When you’ve had kids, how do you restart your career? If you keep up your job full or part-time, you’ll be all right, but I’ve done all sorts of things. I went from working at Radio Bristol when I lived in Bath and when I moved to Dorset there was no radio so I became a jazz singer, but that was pretty scary (to restart) in London. To be honest, I am unemployable. But I believe in making my own employment and we’ve now got 12 people who work for us part-time on Radio Gorgeous.

Is radio too restricted a format for someone inclined to show off?

Donna: I’m not shy of a show-ff gene myself, but what’s refreshing about us is we are enthusiastic. And we can speak as we like. Because we’re not live, we have no Ofcom. We are uncensored. We don’t curse our way through but we can say exactly what we think. Radio Gorgeous has been described as “pirate radio for Vogue readers”. Do you dress up for radio?

Josephine: Look at us, darling. We always have lipstick on. That’s the trademark.

Should women make an effort to look gorgeous?

Donna: As they wish.

Josephine: As they wish, but I do feel that if you get dressed up, you feel better inside. Donna: I like dressing up. I have been accused of being too glamorous on the school-run. I can live with that. I remember in New York after September 11th when a friend turned up in cargo pants and I told her, terrorism is no excuse not to get dressed. I said, you’re in cargo pants: they’ve won.

Which female role models do you admire?

Josephine: I’m just reading about a woman I’d like to have met: Anthony Trollope’s mother, Fanny Trollope. She wrote The Domestic Manners Of The Americans, an international best seller and she said Americans had terrible manners.

Donna: They still do. I can say that.

Josephine: And the worst thing was, they treated everyone equally: equally badly.

Where do you stand on men offering women a seat?

Josephine: To be honest: love it. Bring it on. I’m really sorry, and I know it’s old fashioned, but sometimes I want everyday sexism. I know that’s very un-PC, but I still want to be noticed. I don’t want to become an invisible 50-plus woman.

As the mother of a teenage boy, how do you teach a boy not to become a sexist man?

Donna: I remember asking Naomi Woolf that because I have a son as well, and her answer was that it’s their father’s job to show them how to treat us with respect. Our jobs might be different, but they’re of equal value. She said boys were the man’s job and girls are the woman’s. Although that sounds quite sexist, we grew up with these stereotypes. I remember as a girl collecting the mail and reading Doctor Freed and handing it to my dad, but my mother said, no, I’m the doctor in the family; it was her doctorate. It’s hard to unpick all that now, but teaching respect and value is what’s important.

Does your same-sex focus help the debate?

Josephine: Women want to support each other. When they hear it’s all women, they want to come on to support their sisters.

Donna: Empowering people to tell their stories is doing good, regardless of gender. So, at the end of the day, did you add? Our answer is, yes, in a small way. You’re quite confessional. Do you feel brave doing that?

Josephine: It’s natural to me. With radio you can be more intimate. No one can see you and, being a pre-record, people relax so much more.

Donna: Radio enters you differently. Your entire clue are the words, and you make the pictures. As Josephine always points out: radio is very active listening. Most people are on the radio because they’re news or they’re promoting something. We’re no different. But the BBC, with their adversarial approach, invite people on to scream at each other. They don’t like women on because women tend to agree with each other. We have a discussion rather than an argument. If you’re trying to find something out, being adversarial isn’t always the best way. People can form their own opinions without you braying at them. Josephine: Ultimately, we’re fun, we’re exuberant, we’re daring, and we’re opinionated. We’re gorgeous.

Thank you, Josephine and Donna. It’s been a real pleasure to meet you.

You can listen to Josephine and Donna via RadioGorgeous.com