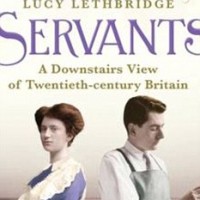 Upstairs Downstairs and Downton Abbey have given us a skewed view of what it was like to be in service in the late Victorian, early Edwardian period. In grand houses, servants turned their faces to the wall when their masters walked by. The work was gruelling and poorly paid, you were up before dawn and couldn’t go to be until master was in bed – woe betide you if they fancied a party. But at least in the big houses you ate well. Worst off were the servants to middle class families who couldn’t really afford them but wouldn’t do without them for social reasons. Lucy Lethbridge gives us the view behind the green baise door in her fascinating book: Servants: A Downstairs View of 20th Century Britain.

WIN ONE OF 3 COPIES of SERVANTS go to our OFFERs Page to WIN! radiogorgeous.com/competitions-offers/