To honour her 80th birthday, Dr Cynthia Moss talks to Corinna about how growing up in the USA inspired a love of nature, leading her to spend five decades in the Kenyan bush.

Many of you will recognise Cynthia from the award-winning films shown on the BBC, PBS and Animal Planet, about the female elephant matriarch Echo, which she presented alongside David Attenborough. Cynthia explains how Echo became her matriarch and how much she taught her about elephant family life.

Cynthia’s scientific research through her charity Amboseli Trust for Elephants, together with the Echo films have profoundly altered the way we think about and conserve elephants.

Cynthia also talks to Corinna about her great pride at sponsoring Maasai girls to attend school and university and why she has no plans to stop working at 80! 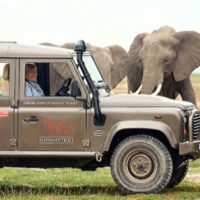